CDO No. 7 Most Competitive City

High-ranking officials from the Australian Embassy in Manila met on August 30, 2018 with Mayor Oscar S. Moreno to discuss city government's development programs and areas of focus not only for Cagayan de Oro City but also for the region, recognizing the city's strategic location in Northern Mindanao. Mayor Moreno... 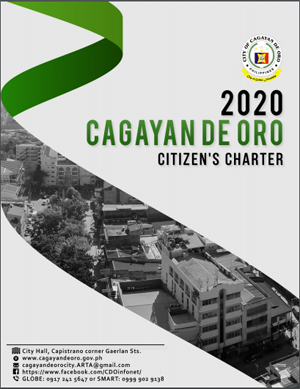 Amid reports of two confirmed COVID 19 cases in the Philippines, CDO Anti-COVID 19 Taskforce reiterates its call for cooperation from the public to help prevent the spread of the...

It's More Fun in CdeO!

Whitewater kayaking in Cagayan de Oro river, Philippines is a totally different experience compared to whitewater rafting. The thrill and excitement is more intense than rafting because you are on your own. You can stay longer in a particular rapids or location as compared to a raft. You can even paddle upstream if the current is not strong enough. Making the most of it and having fun. It's a confidence building experience from put-in to take-out point. But we do it as safe as possible. (Source : KayakDomain)

Cagayan de Oro's annual fiesta celebration, popularly known as Higalaay Festival, is a week-long festivity filled with a series of colorful, culturally-rich and fun-filled core events that culminate on the 28th of August , the feast day of the city's patron saint, St. Augustine.The celebration has grown not only as the customary day of thanksgiving but also as a rallying point for a campaign to promote Cagayan de Oro City and the surrounding areas globally as an investment and tourism destination.

This is a vast property abundant with magnificent waterfalls , imposing views, and exciting activities nestled in the forest park in Cugman. It offers a relaxing environment for those seeking peace and solitude as well as a site for fun and adventure for kids at heart of all ages. Rappel from a 65 foot waterfall. Take a leisurely ride on horseback while exploring the 2,500-hectares property. Dip in its spring-fed swimming pools or take the gripping ziplines. The park also caters to group events and conducts eco-lectures and team-building activities for companies, corporations and groups.

Probaby the biggest military cap in the world, the "scrambled egg hat" marks the spot in the Macabalan Port where Gen. Douglas MacArthur landed in 1942 enroute to his escape to Australia during World War II. The big five golden stars supporting the cap represent the rank of the general. A replica of a USAFFE PT Boat is encased in glass at the center of the marker.

Constructed in 1902 to serve as a fire breach, the park, known as Divisoria, consist of five islands featuring the monuments of the national hero Jose P. Rizal, President Ramon Magsaysay, and Andres Bonifacio. The City of Freedom monument and the Kiosko Kagawasan are also in Divisoria.The Kiosko Kagawasan serve as a venue for cultural an political events. It has the bronze statue of the legendary City Mayor Justiniano T. Borja , done by National Artist Napoeon Abueva.

Tha cave was the site of the historic Battle of Macahambus on June 4, 1900 which marked the Filipinos' first victory against the American during the Philippine - American war. A Marker of the National Historical Institute is placed at the entrance of the cave. The cave is a short cavern that leads to a breathtaking view of the Cagayan de Oro River meanding below.

The Saint Augustine Cathedral was built in 1624 by Fray Agustin San Pedro who was called El Padre Capitan by the residents here. In 1778, boththe church and convent were burned down. From its ruins, Fray Pedro de Santa Barbara, together with generous Cagayanons, built the new church which was inagurated in 1780. But, it too did not last long as it was gutted in 1831.In 1841, the church was rebuilt using concrete materials. It was adorned with beautiful paintings of the four evangelists. It had a pipe organ. The wooden cross which stands today in the front of the cathedral, was erected in 1888.Archbishop James Hayes, SJ, in 1946 rebuilt the Cathedral and the Convent until 1946. It was about this time that the stained glass, given by the New York Sacred Heart chapel, was installed. (PHOTO : by Rhoel Condeza)

Cagayan de Oro is the Whitewater Rafting Capital in the Philippines. It isthe only city in the country that offers rafting year-round. Its river depth, incline and rock formations make rafting here in the Cagayan River a fund and exciting experience.Enthusiasts can connect with any of the several whitewater rafting operators and choose the level of thrill they can handle from 'beginner' to 'advance' to 'extreme'. You can opt to conquer just 14 rapids or go for all 21 of them!The rapids are at an internval of not less than 10-15 minutes of each other.Truly whitewater rafting on the Cagayan River has everything that makes for a one-of-a-kind thrill with awesome roar and power of water cascading over rocks and boulders.

The present building was constructed in 1940 and it is located on the grounds where the Casa Real once stood. With Cagayan de Misamis (the old name of Cagayan de Oro) as the capital of the Segundo Distrito de Mindanao, the Casa Real wasthe seat of the Spanish colonial administration with a Spanish military governor at the helm.On January 10, 1899, Cagayan de Misamis celebrated the new Philippine Republic with a festive parade and cannonades. The center of the two day celebration was the Casa Real where the first elected local officials held office. A historical marker place by the Cagayan de Oro Historical and Cultural Commission was installed in the building a hundred years later. (PHOTO : by Rhoel Condeza)

Named after a pre-war Municipal Mayor of Cagayan de Oro, Segundo Gaston, the park is located near the St. Augustine Cathedral and the Archbishop’s Palace. Gaston Park was the main plaza of Cagayan de Misamis  during  the  Spanish  colonial period. It served as the training ground of local patriots during the Philippine-American War. Later it became the site of the Battle of Cagayan de Misamis on April 7, 1900. A National Historical Institute marker was placed in the park  in 2000.